Mercy of the Gods Slot

Mercy of the Gods Slot Review 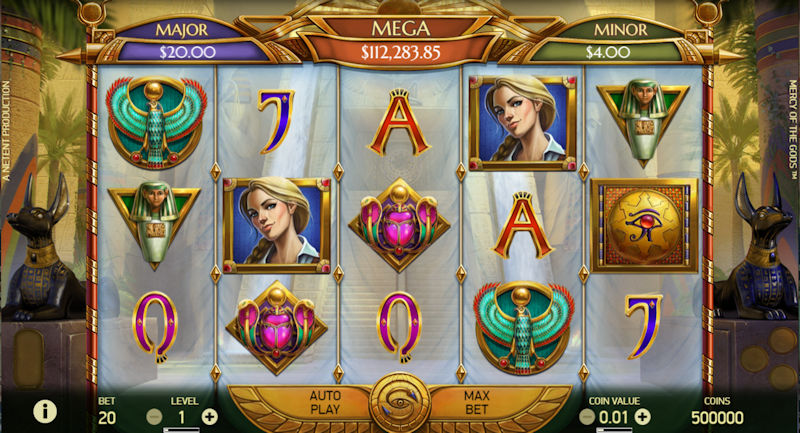 NetEnt has previously had considerable success with its Divine Fortune progressive jackpot slot, and has returned to that game’s format to give it a new Egyptian spin. Mercy of the Gods is its name, and it’s full of Eastern promise to bring several gifts from its spins.

Egyptian themed slots are one of the staples of online casino gaming, so it’s hard to get excited about what on the surface looks like yet another five-reel, twenty payline slot in this genre. However, NetEnt has graced Mercy of the Gods with some very attractive bonus features – with proven player appeal from the success of Divine Fortune – to make this latest spin on Ptolemaic treasure hunting far less predictable. Chief amongst these are the powers bestowed on this slot’s Wilds.

When these Wilds, symbolised as Gold Scarabs, land they begin the Gift of Life Respins feature. That activates a respin, during which any Wilds in view reposition themselves one row down from their current position. Whilst a Wild is in view a further respin is triggered, so multiple respins can flow from a single trigger event. Better yet, should a fresh Wild land on top of a descending Wild during this feature, it in turn activates the game’s Gift of Double Wilds event, expanding that ‘doubled Wild’ to fill the entire reel it appears on. Cool.

For free spins fans, Mercy of the Gods uses the presence of three of more of its Eye of Horus Scatters to gift up to twelve free spins, during which all Wilds activate the Gift of Double Wilds feature mentioned above, giving greater potential to pull in big wins during this bonus.

The final symbol to keep a keen eye out for is Mercy of the Gods’ Bonus Symbols. Three of more in view after a spin will transport you into the game’s Gift of Wealth Bonus game where its headline progressive jackpot prize could be scooped. The triggering Coin symbols are added as sticky symbols to a custom set of five reels upon which three further free spins are played out, each with the potential to add more Coins to that array.

Completing one of the three lines on these special reels gets you the Minor Jackpot, two lines filled rakes in the Major prize whilst the good fortune to max out the screen with fifteen coins filling your view drops the delights of the Mega progressive prize in your pocket. The Gift of Wealth indeed!

In truth Mercy of the Gods is really just Divine Fortune in Egyptian clothing, so you won’t find any features that are wholly unique to it. That said, the Divine features it has embraced are a real treat so that criticism probably won’t make the slightest difference to the huge community of players who’ll revel in the fabulous production values, and exciting ways Mercy of the Gods can turn its spins into wins. This isn’t just another Cleopatra / Book of Ra wannabe, and for that we should thank the (Mercy of the) Gods.

Click ‘Play Slot’ for the best Mercy of the Gods Slot online casino.

Play Mercy of the Gods Slot