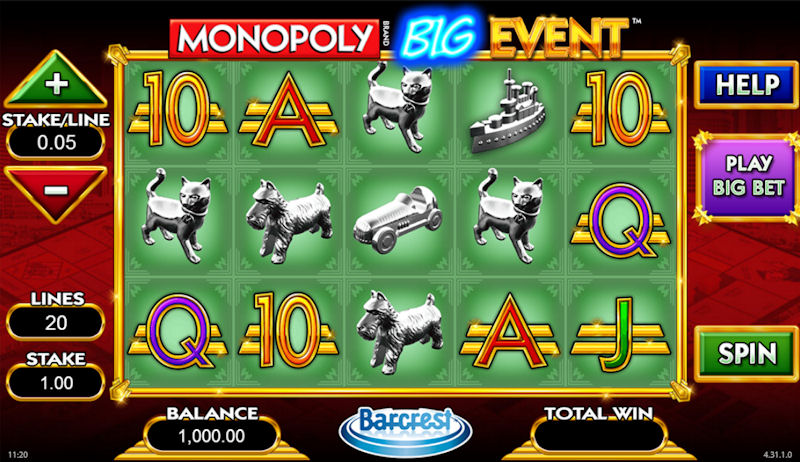 Monopoly slots have proven to be a very popular genre of online slots over the years, and rightly so as they’ve offered solid basegames with fun bonus features that have neatly integrated elements of the famous board game. Previous Monopoly slots have come from the Microgaming stable, but a recent change in the licencing deal by Hasbro (the original board game’s owner) has seen Barcrest – Scientific Gaming – take on the challenge of taking Mr Moneybags for a spin.

All the best online slots start with a solid basegame, and Monopoly Big Event won’t disappoint. With a classic five-reel, twenty-payline array and flexible staking options between a miserly 20p up to an Oligarch-only £500 there’s lots of fun to be had whether your budget is saying Old Kent Road or Mayfair. The symbol set naturally makes good use of Monopoly’s famous player tokens (although where’s our favourite the Top Hat?) and includes a Wild that performs the usual trick of substituting for all symbols bar the two special Bonus Scatters.

Where this online slot really earns its title as a Big Event lies with the extraordinary level of bonus features it packs in to complement its basegame. The Big Event game itself, triggered by spinning the Big Event Scatter onto reels one, three and five in the basegame, is an alternating pick of Chance and Community Cards that allow a player to build a stash of cash rewards, and free spins with a match of three bonus icons triggering a final reward before the accumulated free spins are played out.

But that’s not all; within this game Locking and Dancing Wilds can also be activated by revealing certain icons and entering the Big Event with more than one Scatter on reel five can give you sneak previews of where those icons are! If this all sounds a bit complicated, don’t worry – all is made clear when you enter the Big Event so rest assured you aren’t going to be cheated out of your rightful inheritance.

Another feature this online slot can offer for players with deeper pockets are two Big Bet options lurking under the purple button to the right of the console. These are two choices of auto-playing a sequence of five spins for a fixed stake of £20 or £30. The advantage here is that the two options come with enhanced payout features during those spins, so these Big Bet games have a very attractive enhanced RTP of 99.00%. If you can afford that level of stake, this makes this Monopoly Slot one of the best value-for-money casino games you can play – those odds mean in the long term it will pay out 99p in prize money for every £1 that’s staked!

Monopoly Big Event carries on the tradition of Monopoly slots offering some of the best entertainment you can have with five reels. Its deep set of bonus features can seems a little bewildering at first (not helped by the somewhat confusing explanation of the rules given in the game’s Help menu) but playing and enjoying this online slot is far easier than describing it. Even if you’ve never been a big fan of Monopoly we think you won’t want to miss out on this Big Event.