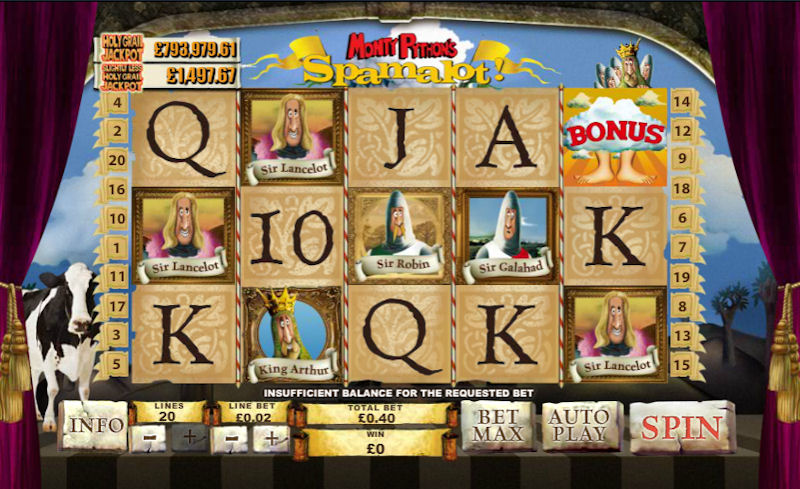 In the quest for new and interesting themes to spark the creation of entertaining online slots, Playtech has often turned to the entertainment world as a source of inspiration. The eccentric and uniquely English humour of the 70s sextet of comedians who formed Monty Python’s Flying Circus initially seems like a curious choice to theme an online slot, but Playtech clearly understand that the enduring global appeal of ‘Python’ is ripe for some reel action.

Based on the revival of Monty Python’s Holy Grail by Eric Idle as the hit musical Spamalot, the Spamalot slot opens its first act with a basegame of twenty paylines, across a fairly traditional set of five reels. For Wild results, you’ll be looking for the Holy Grail symbol itself, whilst the Monty Python symbol serves as this slot’s Scatter, paying out when three or more are in view and also triggering a round of ten free spins, of which more shortly.

The one other special symbol to seek on a basegame spin is the Bonus Scatter, only seen on the first and last reels – should both arrive in view, that is the trigger for Spamalot Slot’s quartet of second-screen bonus games.

Played out over ‘four acts’ (that is, each time the bonus is triggered the next game in the four options is played) these are all prize pick games nicely themed with characters and scenes from the Holy Grail / Spamalot legend.

In order, there is the Storm the Castle Bonus, None Shall Pass Bonus, Knights Who Say Ni Bonus and Killer Rabbit Bonus. Fans of Monty Python will love playing this slot hard to experience all of these bonus rounds, since not only are they a source of tasty cash rewards but also tap the humour of the source material with plenty of appropriate animation and audio samples to make you laugh.

We particularly enjoyed the shouted abuse from the French in the Storm the Castle Bonus, and still laugh like drains on hearing “I fart in your general direction!”

With its excellent set of four bonus games, Spamalot slot already makes a great online attraction, but it goes the extra mile for slot fans with its free spins game that has a couple of ‘big-win’ scoring treats in store too. First, all free spins are followed by the random application of up to five random wilds to the reels.

Secondly is the addition of the Jackpot Symbol to the five reels, and the chance to land Spamalot’s true Holy Grail of a massive progressive jackpot should you be lucky enough to collect five instances during the free spin feature. Acquiring those five symbols is not itself the key to the progressive, but triggers a new bonus game where your quest is to ascend six levels with judicious picks that avoid being crushed by the Feet of God!

Monty Python’s Spamalot slot is a feature-rich game that Python fans should adore, but even if the silliness of Killer Rabbits, Knights Who Say Ni, and the limbless Black Knight (“it’s just a flesh wound!”) aren’t quite your cup of tea, this is a very rewarding slot to play with a hefty progressive jackpot to link luck to some truly massive wins.