Pixies Of The Forest Slot

Pixies Of The Forest Slot Review 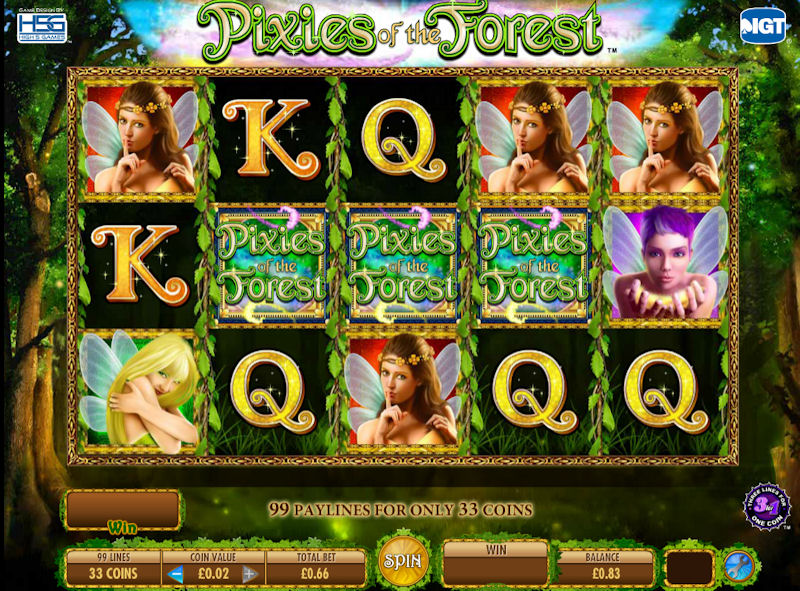 Fantasy themes are quite the thing for many online slot players, so there is no shortage of witches, wizards and unicorns tarting up multi-reel machines at the best online casinos.

Making a play for that popular share of the market is IGT’s Pixies of the Forest slot, but has it got the magical qualities to make it an enchanting gaming experience or are these naughty pixies all tease and no fun?

As we’ve come to expect from IGT – one of the original pioneers of land-based video slots, and subsequently a big player in the online game too – the presentation of Pixies of the Forest slot is first class.

Beautiful graphics and suitably ambient sounds make this a themed slot that’s easy to lose yourself in, but that doesn’t mean it’s forgotten to pack a punch with its actual gaming mechanics.

With a strong focus on its basegame, rather than bolt-on second-screen bonus games, Pixies of the Forest offers a staggering ninety-nine paylines sprinkled like pixie dust across its five reels where nymphs play amongst the traditional A,K,Q symbols.

Interestingly, a 3-for-1 coin bet means that only thirty-three coins need to be staked to get these into play, and a decent spread of single coin values lets players with all sorts of budget enter the Forest.

In classic video slot style a Wild symbol complements the main symbols, substituting for them where a win can be generated, although not the Bonus symbol (of which more shortly).

What lifts Pixies of the Forest slot above the ordinary is its splendid Tumbling Reels feature in play at all times. First seen on IGT’s legendary Da Vinci Diamonds slot, this is a superb idea which can build a win into multiple raids on the Pixies’ paytable.

In essence any symbols that form a winning combination on a payline magically disappear once their work is done, causing symbols above them to tumble down bringing new symbols into view and potentially triggering new wins.

This can repeat until no new wins are connected across the paylines so each spin on this online slot can turn into a mesmerising chain reaction of wins far beyond the initial combination of symbols that collect on the paylines. Once experienced you are drawn to keep playing to see it happen again and again, accumulating nice wins into the bargain.

Hinted at earlier Pixies of the Forest Slot is not replete with additional bonus games, but it does offer a freespins game triggered when three of its Bonus Symbols are found on a payline.

The precise number of free spins awarded is discovered on picking one of the Symbols to reveal your reward.

Adding to the expectation of bigger wins in this bonus round, extra Wilds come into play during these free spins so the Pixies could be ransacking the paytable with even greater abandon if you’re lucky enough to enter this part of the Forest.

Some online slots just have the right chemistry and, whether you’re a fan of fantasy themed slots or not, Pixies of the Forest has a magical blend of simplicity with beguiling gameplay from its Tumbling Reels. We’re under its spell, and we think you will fall for its charms too if you venture into the Forest for yourself.

Click ‘Play Slot’ for the best Pixies Of The Forest Slot online casino.

Play Pixies Of The Forest Slot