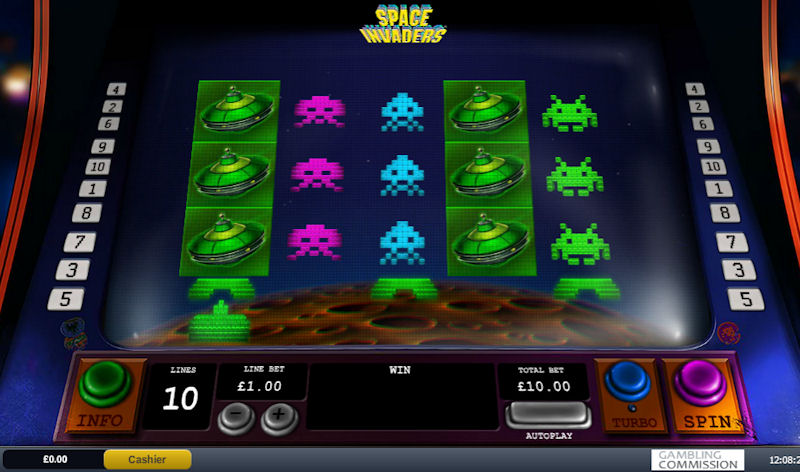 The original Space Invaders arcade game released by Taito back in the late 1970s was, in a very real sense, what we now call a ‘game-changer’. Whilst it was not the first hit video game – an accolade probably reserved for the clunky ‘tennis’ game of Pong – it had an impact that probably makes it to video gaming what Google is to Internet search. In homage to this veteran video marvel, Playtech has released its Space Invaders slot to fuse old skool arcade gaming with modern online slot entertainment.

First impressions count, and Playtech have done a superb job in recreating the original arcade cabinet, screen and controls to give a fantastically authentic look to the Space Invaders slot. The basegame is built on five reels, with ten paylines and the liberally stacked symbols naturally use the three classic eight-bit aliens, augmented with four other icons of ‘space invasion’. The screen layout closely echoes the original Space Invaders look, including the three shields and cannon beneath the ranks of invading symbols – and they’re not just for show as we’ll come to shortly. The ten paylines are fixed in play for every spin, so it’s a simple choice of choosing your bet between the game’s limits of £0.10 and £200 to get into the action.

Space Invaders slot has no fixed Wild symbol as such, but there’s plenty of Wild ways to win from those five reels. First, you’ll be keeping a beady eye on the cannon mentioned earlier. It moves on each spin, tracking below the reels like the original Space Invaders game, and when under reels two and four (the only reels exposed to its barrel) it can fire to explode the Invader symbols in its path into Wilds if that will generate a paying combination. This feature not only brings wins, but doubles those won with this firepower.

The second Wild feature brings the classic mothership UFO into play. This can randomly appear to track across the top of the reels, and where the cannon can knock it out of the sky up to nine Sticky Wilds will be added to the reels and a respin triggered. These two features are nice and simple but add a great feel to Space Invaders slot, bringing a nostalgic nod to the gameplay of the original game and the opportunity to blast some big wins from the paytable.

Our love of the original Space Invaders game set expectations very high for this slot. Happily Playtech have met those expectations with a very neat transformation of Space Invaders’ look and feel (including the classic sound effects which are a joy to hear again) into a very compelling slot.

Its retro appeal might pass younger players by – they’ve got the Tomb Raider slot for their nostalgia – but even if you weren’t a child of the 70s and early 80s this is a very entertaining slot with features that we think put it in the same space (every pun intended) as Starburst. Well worth checking out, and you have the added satisfaction of saving the Earth from malevolent alien invasion should you win big!