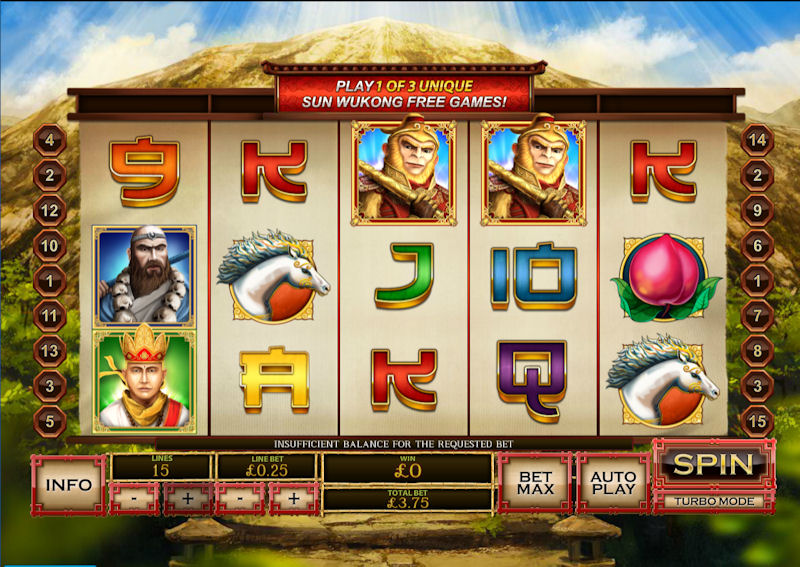 In recent years Playtech has been mining a rich seam of inspiration for its themed slots from the culture of the Far East. Its Sun Wukong slot is just one of the results, looking to the story of the Monkey King (which is what Sun Wukong translates to) and his epic mission with chums Pigsy and Sandy to help Buddhist monk Tripitaka on his pilgrimage across Asia. Players of a certain age will no doubt remember this tale with some affection after the famous Monkey TV series in the late 70s! Monkey magic . . . monkey magic . . .

Returning to how Playtech have reimagined this 16th Century tale into a 21st Century online slot, the four pilgrims set out to reward players with a basegame of five reels and fifteen paylines. Stakes can be dialled in between £0.01 and £75 per line so, with flexibility to adjust the number of paylines activated too, spins can begin with as little as £0.01 or be loaded with a maximum bet of an eye-watering £1,125.

The Monkey King puts in the effort as Sun Wukong slot’s Wild symbol with two roles. First, he is the top paying symbol with five instances on an active payline dropping a a magnificent 10,000 times the linebet in your lap.

Secondly he will not only substitute for all other symbols except the Scatter, but also double any wins generated by that trick. The Scatter is exempted from the Monkey King’s Wild side for traditional slot reasons because, besides its own power to trigger payouts in the basegame, it also unlocks Sun Wukong’s free spins feature when three or more instances are in view.

There’s a little more magic to this Monkey’s bonus game, since the Sun Wukong Free Games feature is a trio of free spins packages the player may freely choose from. Framed around events in the historical tale of Sun Wukong these are:

Valley of the Sun – A bonus of twenty free spins enhanced with all wins during the feature being doubled.
Mountain of Fruit and Flowers – A bonus of ten free spins with all wins in this feature multiplied by four times.
Kingdom of Heaven – Just eight free spins are the reward here, but those that generate wins will ramp them up to five times the standard payout.

Whichever route to bonus enlightenment you choose, the Scatter remains a companion on the reels so the feature can be retriggered during the bonus for an extended pilgrimage of free spins.

Our affection for the Monkey TV series makes us biased towards liking Sun Wukong slot (although a slot using that series’ footage and funky theme would be even better!). Putting that bias aside, we think this slot’s a very nicely presented game, with quite a soothing ambience in many respects.

We particularly like the free choice of free spins games should luck bring you into that bonus feature. Of all the Chinese-themed slots from Playtech, this is one of our favourites and if you’re new to this genre of game it’s the one we reckon is worth monkeying about with first.