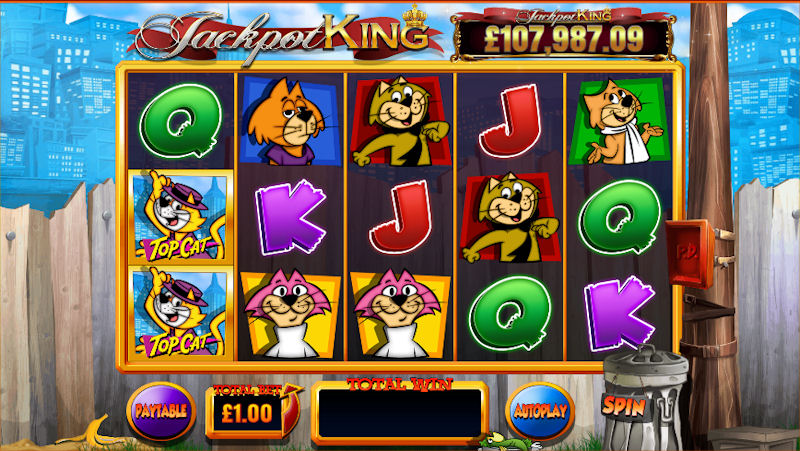 For those of us of a certain age, Top Cat brings warm memories of this legendary Hanna Barbera cartoon cat and his troupe of street-smart feline chums (well, except Brains who was anything but).

A true cartoon classic, Blueprint has given TC and his gang the video slot treatment and gone berserk with bonus features! So is this Top Cat slot the cat’s whiskers or have Blueprint actually coughed up a manky fur ball?

Settling into the basegame of Top Cat slot we find five reels and twenty paylines in play, with a bet range between £0.50 and £200 per spin. So, plenty to get your claws into there for starters. Naturally there’s a standard Wild on the reels – a plate of fishbones – but that’s just the start of the Wild behaviour to be found on this slot.

First you’ll be watching for Fancy Fancy’s Hot Dog Respins feature that starts with a full stack of Wilds on the fifth reel. This initiates a respin, then walks the Wild reel one step left with each respin. That feature in itself would satisfy most players, but TC has other plans, with his Choo’s Piano Wilds and Brain’s Water Wilds features adding to the mayhem.

These are both randomly triggered bonuses that award random wilds or whole wild reels respectively with funny, character-driven animations to accompany the action. It’s all a fitting tribute to the original Top Cat series.

Two further randomly triggered bonuses bump up the lavish feature set of this slot. Benny’s Colossal TVs sees Benny summon a mystery symbol onto the screens of the TV’s he randomly scatters onto the reels, whilst Spook’s Mice as Nice sets a gang of animated mice to work jumbling the reels into guaranteed wins until Officer Dibble shows up to end the fun (and escalating winnings)! So that’s all the bonus features done now, right? Wrong. Blueprint clearly feels more is more and so there’s a Bonus Scatter symbol on reels 1, 3 and 5 which will trigger the Masterplan Feature when all three are in view.

This Masterplan is itself a player pick of five alternative bonus games, with options for free spins games enhanced with multiplier and special wild features, together with “player pick” games where your selection of on-screen characters and items aggregates cash awards. Phew!

Amazingly, even with this extraordinary bowl of bonus features to lap up, Top Cat slot can also cram in the Jackpot King progressive jackpot game. This is a separate game, triggered by spinning five Jackpot King overlay symbols into view.

Within this bonus game a fresh set of reels is used to accumulate Crown symbols, earning cash in the process and the chance to spin a further Wheel King feature where the ultimate progressive jackpot prize can be snared.

Top Cat slot is undoubtedly a game for players who love lots of bonus features, and rivals South Park Reel Chaos in this respect (we suspect it may even have been conceived to directly compete with that hit game).

It’s all great fun, and as fans of the original cartoon we think Blueprint have created a fitting homage with this themed slot. The delights of big wins from the bonus features is just part of the appeal here, but you will certainly feel like the cat that’s got the cream if Top Cat slot’s progressive jackpot lands in your lap during a session!