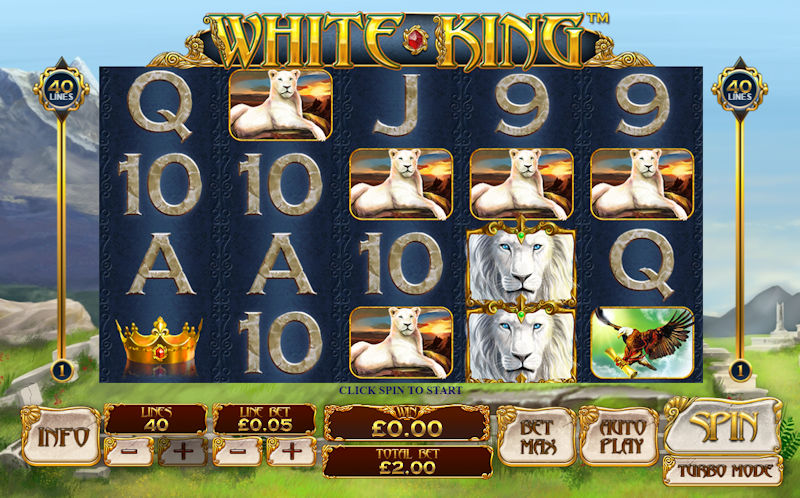 Before clapping our eyes on White King we did wonder whether it was a first foray into online slot gaming by Prince Charles anticipating his ambition to become king being realised sometime soon. Thankfully that weird thought was quickly dispelled when White King revealed himself to be a majestic white lion rather than an elderly Windsor with odd ears.

What a white lion’s got to do with casino slots is actually equally mysterious as Chas featuring on a slot, but the themes applied to video slots these days seem to be rather random . . . anyway White King seems to fall into the category of fantasy themed slots judging by the Aslan-esque demeanour of the regal feline and general Narnia vibe of the audiovisuals.

Right, visuals aside what we’ve got here is a five-reel forty payline beast with the White King being a truly Wild animal landing both the jackpot when he puts in an appearance five times on a payline (winning x1000 the linebet) and substituting for all other symbols, except the White King Scatter symbol, where that can generate a win.

To increase sightings of this rare beast, White King deploys Stacked Wilds on its reels making wins more likely whenever a Wild comes to stop in view.

The Scatter symbol mentioned earlier appears only on the middle three reels of this online slot, and the presence of all three in view cues White King’s Majestic Night Free Games round. Here five spins are the bonus, with more Wilds in play on the reels and infinite retriggers possible should the three Scatters keep returning with unseemly abandon.

Beyond the simple basegame and freespins bonus feature White King is curiously sparse. Basic, simple themed slots are no bad thing but we can’t quite fathom what White King does that would make you want to ride these reels in favour of the many rival forty payline slots . . . other than really, really liking white lions of course.

Two other factors also make this an online slot we think has limited appeal; first it’s understood to be a high volatility slot, which means wins can be big, but frequency of wins is reduced. Perhaps it reflects the sparse, barren nature of the domain of the White King, but if regular wins are your thing, then this lion won’t roar for you.

Secondly, and far more concerning for any player, is the weak RTP figure this video slot delivers. 90.05% is a pretty mean figure amongst the massed ranks of online slots players can choose from today, and frankly pretty tight with such a basic format. We are more forgiving of low 90s RTPs where a game has lots of bells and whistles to entertain us while playing, but White King simply isn’t in that category.

Playtech’s White King slot is, quite simply, a ‘curate’s egg’ in our opinion. As a basic forty-line video slot it does all the right things to deliver a solid online slot experience, however it does nothing special to make us love it and, far worse, its limp RTP figure means we’d much rather keep a respectful distance from the White King than pledge our allegiance to his reels.

Bai Shi Slot
Playtech have launched a new version of this slot called Bai Shi. Whilst the RTP of White King is 92.07% the RTP of Bai Shi has been increased to 95.99%. Bai Shi Slot is a Chinese themed game with the same game play as White King Slot.