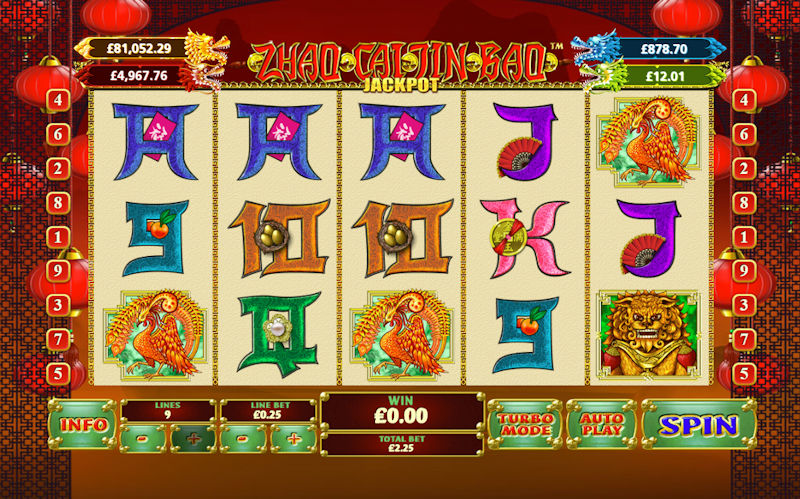 Playtech have certainly shown a penchant for oriental themed slots in recent times, and its Zhao Cai Jin Bao Jackpot slot can probably claim to have the strangest title to Western ears.

Our Mandarin being utterly hopeless, we resorted to the wisdom of the Internet to learn that Zhao Cai Jin Bao is a traditional Chinese greeting, especially at New Year, that means ‘we wish you wealth and success’, so we kind of get where Playtech is going with this now.

That quick lesson in Chinese idioms over, Zhao Cai Jin Bao Jackpot slot is another extremely simple slot, that feels very much a companion game to Playtech’s Nian Nian You Yu game (whose title is also a Chinese New Year greeting . . . we see a pattern forming here).

There are just nine paylines straddling the five reels, and very malleable betting choices to let you get in a spin for as little as £0.01 or exhibit your existing wealth and success by dropping a phenomenal £900 on a single game.

Like Nian Nian You Yu slot, Zhao Cai Jin Bao Jackpot is resolutely focused on its basegame, so whilst there is a Wild and Scatter symbol to augment the standard symbols on the reels, there are no additional bonus games that can be triggered. Love free spins? Forget it. Bang up for a bonus trail? Not here, pal.

The Jackpot element to this slot’s title does hint at one final way to exit a session with more wealth and success than you started, since this is another oriental slot in Playtech’s playground that is linked to its whopping progressive Dragon Jackpot prize.

Similar to the Mystery Progressive Jackpot mechanism found on Playtech’s Marvel Slots, this is randomly triggered on any spin of any amount, although higher stakes will attract a greater chance of the feature activating.

Should luck land you in this feature, a Wheel of Fortune is spun as many times as it takes to collect three instances of one of the four-coloured dragons, that trigger the award of one of the four levels of progressive jackpot.

The Green Dragon prize is the lowest tier, whereas the Golden Dragon is the dream outcome with its pot seeded from £20,000 and the popularity of Playtech’s oriental-themed slots meaning it grows pretty dramatically from there before it’s won.

Zhao Cai Jin Bao Jackpot’s potential appeal probably lies in three areas; if you love (a) simple slots, (b) oriental-themed slots and /or (c) progressive jackpot slots this game should be worth a look. We’re not personally gripped by it, but it has plenty of players flocking to its reels at the best online casinos so its simple charms seem to ably deliver on its premise of ‘wealth and success’.