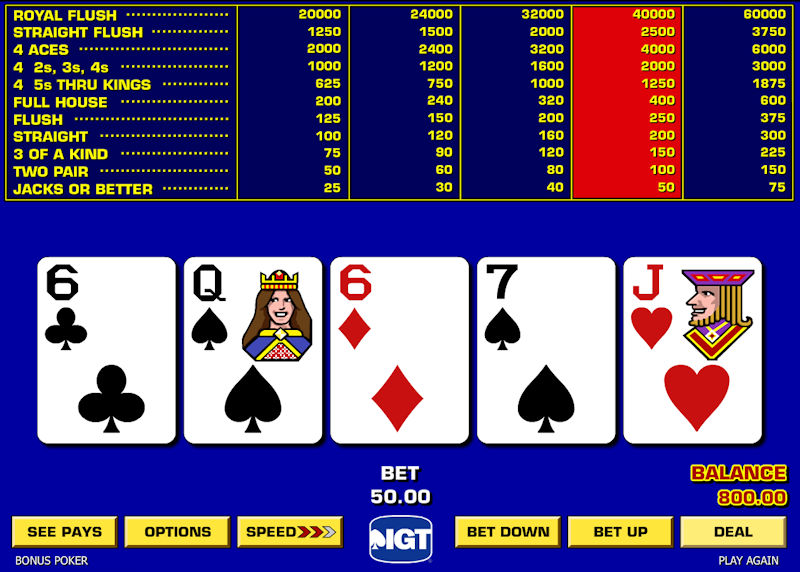 Video Poker was one of the first gambling games to embrace early consumer computing power to appear in consoles on real-world gaming floors in Vegas. IGT, or SIRCOMA as it was originally known, was one of the pioneers of this genre of casino game and so it’s often highly revered by Video Poker fans who learned their chops playing cabinets in bricks ’n’ mortar venues. IGT’s Game King series offers several variants of the basic Video Poker concept, and this review puts Bonus Poker under the microscope.

If coming to Video Poker for the first time, clapping eyes on the online version of Game King Bonus Poker might be a bit of a shock. If you’re used to the high-production values of typical online table games and slots, then the clunky, chunky, primitive sound and graphics of this game will be instantly unsettling. However, this is part of the authenticity of this online version, capturing the unique 8-bit, 80s vibe of classic Video Poker consoles that fans love. And, it also means this game plays without making even a relatively ancient desktop or mobile device break a sweat!

Getting into the fundamental attractions of this Bonus Poker variant, its basegame is the classic Jacks or Better Video Poker rule set with a modification to the hand rankings to add a discrete pay tier for four-of-a-kind Aces, 2s, 3s and 4s. This comes with some tweaks of the paytable to rebalance the overall RTP, but knowledgeable players often favour this variant since its headline RTP figure of 99.17% is extremely attractive if you know your strategy for perfect play. And speaking of perfect play, this game does also tend to favour experienced players since it does not include an auto-hold facility when good hands are dealt.

Video Poker is one of the less popular categories of gaming to be found at the best online casinos, but it offers handsome rewards for players who get to grips with its strategy. And Game King Bonus Poker is a very attractive proposition for delivering a rewarding experience, even if its presentation is stuck in the last Century. Perhaps that self-consciously retro style is also part of its charm? That will be a matter of personal taste we suspect, but if you grew up with Atari 2600s, Commodore 64s and ZX Spectrums we doubt Game King’s graphic style will be a deal breaker!