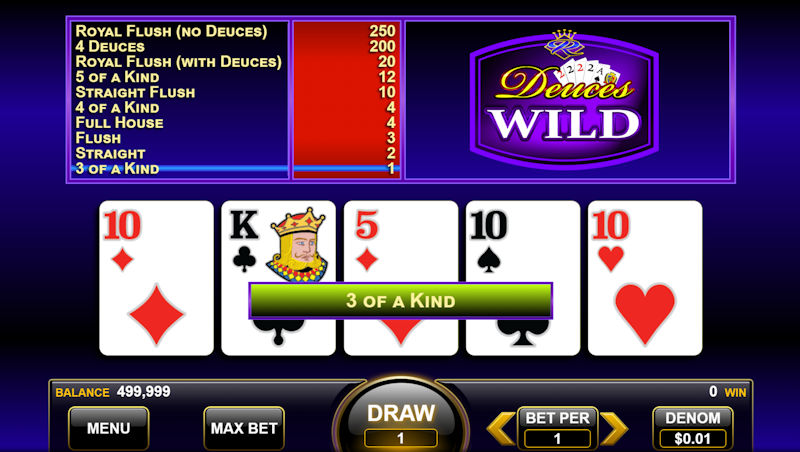 The Deuces Wild variant of Video Poker has legendary status in the history of these games, since in its real-world ‘full-pay’ incarnation it could boast an RTP figure of 100.76% with optimal play! That marked it out as a prime target for player’s with good knowledge of strategy as the best paying game to be found in any casino. Nowadays you’ll be hard pushed to find a version with that ‘full pay’ paytable, however it’s still a great game worth checking out if you love Video Poker.

The format for Spin Games’ Deuces Wild takes the classic gameplay of Video Poker, with the extra advantage of, as the title gives away, Deuces (2s) playing as Wilds that can substitute for any other card value where that will create a winning hand. That creates far more ways to win, so you’ll find that the minimum ranking hand becomes a Three-of-a-Kind rather than the more usual Jacks or Better rule to balance that out.

We’ve often criticised other Video Poker games for the rather basic presentation they’ve adopted, mostly intended to replicate the original Video Poker machines that started the revolution which were limited by the graphics and sound the technology of the time could handle. Spin Games has given this Deuces Wild game a slightly more polished presentation, which we appreciate, however we still think it could be a little more adventurous in its design to give the experience a more modern feel. That said it still plays in a pretty satisfying way, whether you access it on a desktop or mobile device.

The only serious criticism we would level at this variant is its published RTP. Even with the Max Bet engaged, optimal strategic play will only move the theoretical long term RTP to 97.58%. That feels low when compared to other Video Pokers that can better 99%, and is made less attractive in terms of value-for-money when you note that you can get an RTP close to that by playing European Roulette which requires no skill!

Spin Games has done a nice job with its Deuces Wild, but we can’t ignore the relatively weak RTP if offers, particularly since traditionally Deuces Wild machines had the best percentages out there. That said, RTP isn’t the be-all-and-end-all when choosing what to play at an online casino, and Deuces Wild becomes a far more attractive choice if the challenge of strategic play is important to you and you fancy something beyond the usual suspect of Blackjack to scratch that itch.